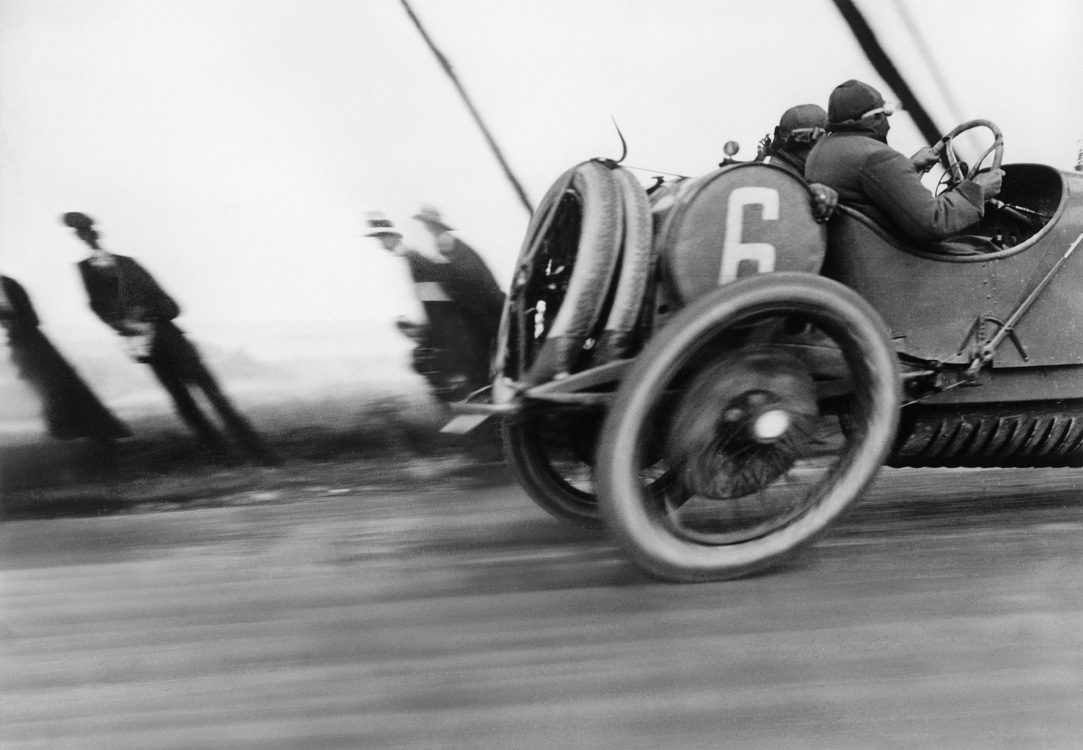 It’s nearly impossible to think of Lartigue’s photographs without this particular one coming to mind; it is often referred to simply as The racecar, making it a sort of Lartigue « logo ». The image embodies the characteristics inherent to Lartigue’s work, such as movement, vitality, modernism and beauty.

Lartigue’s interest in automobile racing began early on, spurred on by his father and older brother Zissou. When his family travelled to Auvergne in 1905 to watch their first automobile race, the Gordon-Bennett Cup, young Jacques photographed the moving cars, made drawings of them and then made sketches of photographs he had taken during the day. His visual sensitivity and innovative techniques made for surprisingly realistic images for the time.

In 1912, while in le Tréport, he described in his diary his photographic process : « The first car is coming! There’s the bend, then the home stretch… it speeds by us, amazing! The second one is coming. It’s Boillot with Peugeot. I shoot as it speeds by at 180 and pan the camera to keep it in view. It’s the first time I”ve tried this! I take the pictures. Yves (the driver) checks off the list. Mrs Folletête notes the time and Mr Folletête (his tutor) calls the number. We thus follow the race down to the last detail. »

In his book « Lartigue et les autos de course », Pierre Darmendrail offers further insight into this particular photograph: Not only did Lartigue employ inventive techniques, but he intentionally stood by the roadside, staying close to the car as it sped by in front of him at more than 140km per hour. He most likely wanted to feel the speed viscerally, in his very being, to become one with his subject… hence the vitality and intensity that pervade the image.

The question of the photo’s caption remains. Lartigue placed the photo in the 1912 album and added the following title: Automobile Delage, Grand Prix de l’Automobile-Club de France, Le Tréport, 26 juin 1912. But according to David E. Junker, the race car is a Théophile Schneider that competed in the ACF Grand Prix in 1913. Is this a mistake? Did Lartigue knowingly leave it that way? No explanation was ever found in his journals.