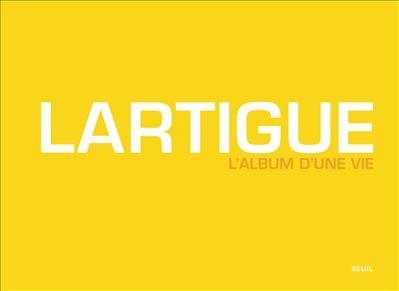 Lartigue’s photo albums were shown for the first time at the Centre Pompidou in 2003. The only known autobiographical photography endeavor to this day, in addition to being an unprecedented testimonial of the past century, these albums are also key to thoroughly understanding Lartigue’s singular approach. In conjunction with the exhibition, a catalog was published in which the photographs are shown as they were originally presented in the horizontal albums. The catalogue rapidly sold out and has been reprinted several times in its initial format. Today, Seuil Publishing has come out with a smaller version with the same content.

A comprehensive publication of the photographs with their subtle details and precise layout finally reveals what everyone expected to see in Lartigue’s work : a meaningful chronological unfurling of the photographs in the context in which they were produced, and arranged by this brilliant amateur photographer, considered by American critics one of the greatest photographers in his day.